THE ART OF HOSTING MORECAMBE BAY

Day Two
Designing and delivering on our dreams

Feed forward and check in

We began day two with a bit of harvesting from the newly formed harvesting team, they reminded us of the check in poem from the first day and then invited us to look under our chairs for some words that had been significant from yesterday. Then to find people who had the same words and to be in conversation about how that word had been important to them yesterday.  The words were 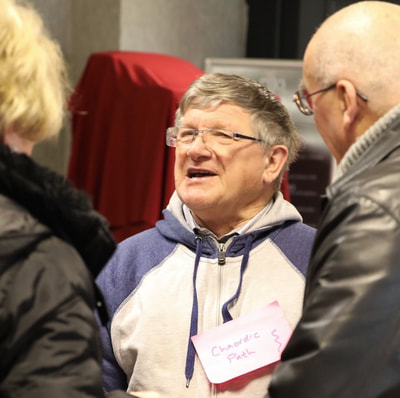 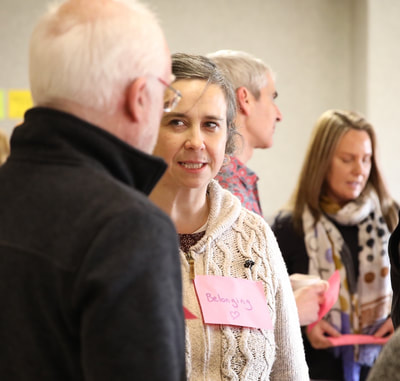 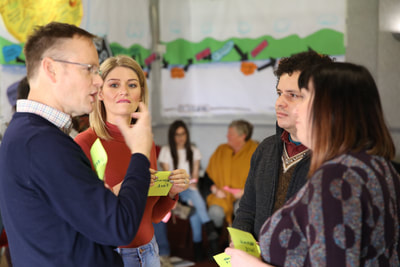 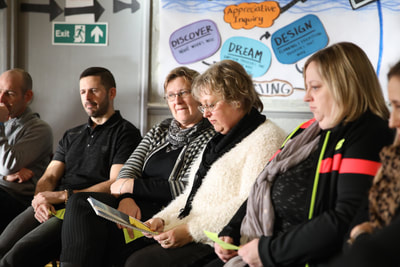 The newly formed check in team invited everyone to place on the Barrow Map both a star to show where they were from and an object that was meaningful for them.  We were then invited to check in using one word, so we could take a temperature check of the whole group.  It was a challenge to keep to one word and we experienced a familiar scenario when hosting large groups of people.  When do you give time to what ever needs to be said and is emergent but might take you off your schedule for the day?   When do you need to intervene to bring things back on track?  This being a training and it being important to make sure we had the time for all the learning of the new hosts we kept the check in short but sweet.

Opening Space
What do we need to explore now to move closer to our dreams and visions ?

Jose ( Happy Birthday ) introduced us to the divergence - emergence - convergence model.  Explaining that each of the stages is needed for groups to work together, but that we often rush through the emergence space to get to the answer too quickly, and that's why actions and ideas often don't stick as they haven't had enough time to really become collectively explored.
The newly formed hosting team team invited us into an Open Space.  A very simple, powerful way of holding highly productive and inspiring meetings, conferences, and other learning events for groups of 5 to 2,000 or more. This is a meeting with no prior set agenda. All who care (passionately) about the theme of the meeting show up and sit in a circle. The sponsor of the event may say a few welcoming words, after which the facilitator gives no more than 15 minutes of instructions, framing the invitation and explaining how the group is invited to work.

The host explains that anyone who cares to may announce a topic (or topics) to discuss in sessions. Participants are invited to go to the centre of the circle, write their session topic on a sheet of paper, write their name (indicating they are taking responsibility for convening the session and also take responsibility for some harvest or feedback from the session. Then the participants announces their topics to the group and post them on the Community Bulletin Board.  Together the group creates the agenda, the Community Bulletin Board, by posting the session topics on a wall  indicating the time and place of each session with a post-it.

After that, the Board becomes the Village Marketplace, which is opened for participants to determine what they want to participate in. And then everyone gets to work in self-organizing concurrent groups. People manage their own time, space, and energy. They may choose to “bumblebee” from one concurrent session to another, cross-pollinating the conversations in the different groups. Or they might choose to be “butterflies” and just stand (or sit) at the tables with tea, coffee, and other refreshments that are available throughout the OST meeting, often described as a nonstop coffee break.  OST works on one Law, the Law of Two Feet:If you feel like you are neither learning nor contributing, you are responsible to use you your two feet and leave, perhaps move to another group..  Follow your passion and take responsibility for your participation.”

10 conversations were called and 2 lively rounds followed.  We then came back together to hear back a harvest and some tweets from each of the group hosts.
​

DESIGN LAB
COLLABORATING TO BRING OUR PROJECTS TO LIFE

Finally a small team of participants hosted us into a design lab.  Inviting people to  put forward real projects that they were working on and that they wanted some help with.  A template to help everyone think though the design principles was provided and we spent an hour in small groups developing the projects and asking some questions to help the project holders get clear on what they were trying to do.  Some peer coaching followed, everyone moved to a new table and heard a quick summary, then the project holders turned their backs and listened in to the new groups response.  Not being able to respond allowed some strong feedback to come forward.  Finally the project holders returned to their groups and spent some time in summarising where they had got to and what their next steps were 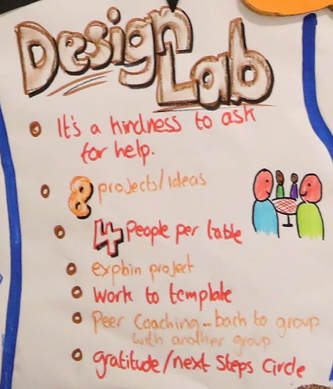 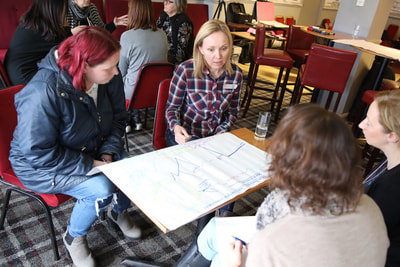 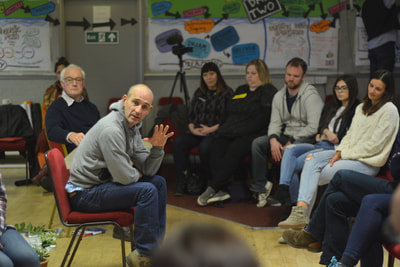 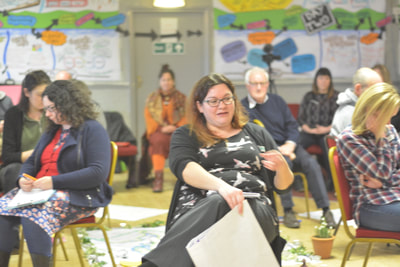 Check out and commitments circle

Finally we checked out with a circle of commitments, everyone speaking their intention to what they offered to do now or to take away as an action from our time together.   The aim of this session was to really make visible the results of the two days and to show some of the places where people had real intentions to work collaboratively with each other.  People stepped in to support each other as they made their commitments and intentions real. 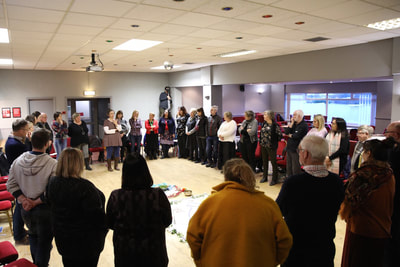 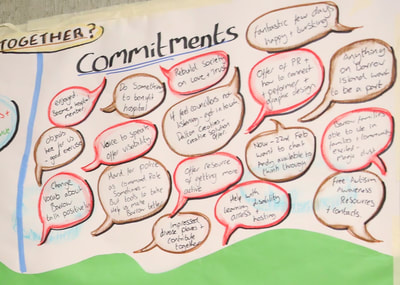 A FINAL MESSAGE:  Thank you Barrow we LOVE you. 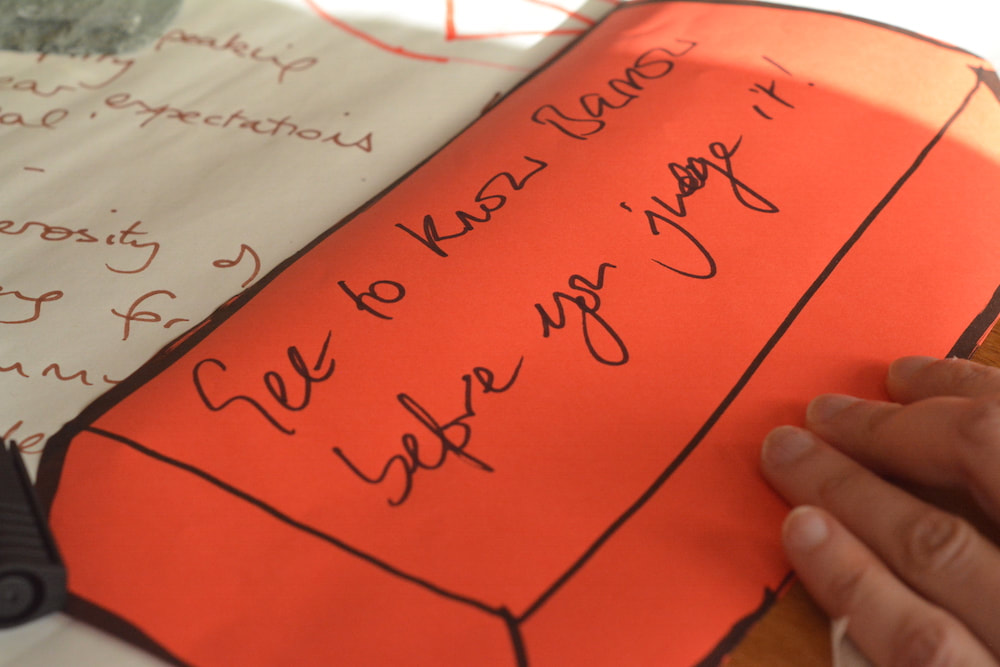